This website is provided by Members of the Uttlesford Local Group of Essex Wildlife Trust to give information about the wildlife that can be found in the rural countryside of Uttlesford District, around and between Saffron Walden, Great Dunmow and Stansted in north-west Essex. To find our reserves and other sites of interest go to Places to Visit.

Although, in common with the rest of the country, this area has suffered from the impacts of development and intensive farming, there are still many places where rare species and attractive habitats can be found. The picture in our logo is Crested Cow-wheat, and Uttlesford is now one of the last parts of the UK where this species can be found. You can read more about this species on the Saffron Walden Museum website.

Ancient woodland with Oxlips, and chalk grassland roadside verges are specialities of the area. There are also marsh sites in our river valleys, and traditional orchards, all offering opportunities to see many wildflowers including orchids.

Our gardens are an important habitat for Hedgehogs, which have suffered a massive population drop over the last few decades. Watch this cute video to see how to make your garden Hedgehog friendly.   And if you are driving at night and see a Hedgehog on the road in front of you, stop the car and help it get to the side of the road !

A set of photos taken in this area to show the changing seasons. 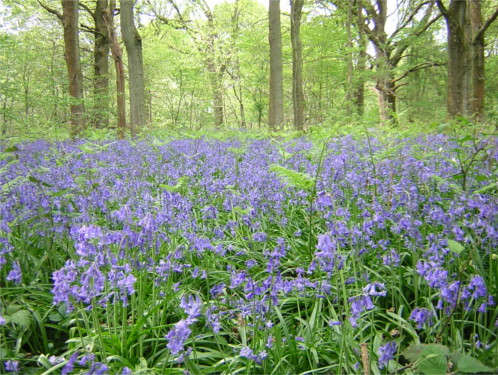 Many of the woods in the district have a display of Bluebells in the spring. The colour and scent of a carpet of Bluebells in May is a wonderful spectacle. © Tony Morton

Uttlesford Wildlife now has a YouTube channel with a few videos of the wildlife of our area captured on trailcam. Click this link to visit the page:
https://www.youtube.com/channel/UCxNQtHw8jnYDTkon2euLQ0A

Earth Overshoot Day was July 29th, the earliest ever, and marks the date when humanity’s demand for ecological resources (fish and forests, for instance) and services in a given year exceeds what Earth can regenerate in that year. We keep growing this deficit by liquidating the Earth’s natural capital and accumulating waste, primarily carbon dioxide in the atmosphere.

This means that humanity is currently using nature 1.75 times faster than our planet’s ecosystems can regenerate. This is akin to using 1.75 Earths. Overshoot is possible because we are depleting our natural capital – which compromises humanity’s future resource security. The costs of this global ecological overspending are becoming increasingly evident in the form of deforestation, soil erosion, biodiversity loss, or the buildup of carbon dioxide in the atmosphere. The latter leads to climate change and more frequent extreme weather events.

We only have one Earth.

Read much, much more at https://www.overshootday.org/

IN its 20th anniversary, the latest Living Planet Report provides a disturbing summary of the ongoing collapse in ecosystems around the world. The analysis is complex, but one quote is that, "Humanity’s demands have far exceeded what Earth can renew. Prior to the explosive population growth of the 20th century, humanity’s consumption was much smaller than the Earth’s regeneration, but this is no longer the case. Consumption indicators – such as the Ecological Footprint – provide a picture of overall resource use. Humanity’s Ecological Footprint has increased about 190% over the past 50 years.". You can read the report at; Living Planet Report 2018

A Peoples Manifesto for Wildlife

A review of nature conservation policy and legislation has been undertaken by a group of wildlife experts who have produced their Peoples Manifesto for Wildlife  that sets out the changes that are needed to stop the continuing loss of species and habitats that Britain suffers. A thought provoking read.

A fascinating article from Miles King about Nitrogen and its critical role in ecosystems. See The Nitrogen Dilemma
https://anewnatureblog.wordpress.com/2018/06/04/the-nitrogen-dilemma/  Did you know that half the humans on the planet are made from artificially fixed Nitrogen?

An inspirational video from George Monbiot about Wolves in Yellowstone Park and the deep connections between species in ecosystems. Would Wolves bring our current burgeoning Deer population back into balance with its food supply? And a bit closer to home here is a 20 minute film about Rewilding Scotland.

The latest information on Ash Dieback disease is being posted on the DEFRA website.
Ash Dieback has been found extensively in Uttlesford on roadside trees and on many trees in West Wood and Shadwell Wood, with widespread hanging dead black leaves. It looks like we are eventually going to lose many Ash trees throughout the country. More hopeful news comes from University of York (Jan 2016) with this video showing a new genetic test to screen Ash seedlings for disease resistance.

A leaflet showing the Essex Wildlife Trust reserves in Uttlesford can be downloaded by clicking Here (PDF 620KB).