A walk of about three and a half miles to see the Oxlip and the countryside around Great Bardfield. OS Explorer Sheet 195. Starting from the centre of the village. OS Reference TL677305. Take the walk in April to see the Oxlip in flower.

The story of the Oxlip 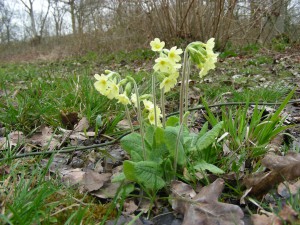 Please download a copy of a leaflet about the Bardfield Oxlip (PDF 2.0MB)

The Oxlip is one of five native primulas, and is a nationally scarce plant growing only in the area where Essex, Suffolk and Cambridgeshire meet. In Essex it is found only on the heavy boulder clay of the north west in ancient woodlands and in streamside meadows. The Essex botanist John Ray first identified the Oxlip as a species in 1660, but it was not universally believed that it was a true species, and many people saw it as a hybrid between primrose and cowslip. Henry Doubleday, a naturalist from Epping, visited Great Bardfield regularly in the 19th century where he saw the plant in the meadows here, and was sure it was a true species. A letter of his from 1842 describes Oxlips growing by thousands in the Bardfield meadows. Finally in 1869 Charles Darwin published a paper based on his own experiments proving it is a true species. From that time on the plant was known as the “Bardfield Oxlip”.

A carving of the plant appears on the Town Hall and is the parish emblem. by 2002 a survey of Bardfield found only a handful of plants growing in just two meadows, but a recovery plan was put into action to propagate the plant from local seed and replant it. This walk takes you one of the two replanting sites.

Great Bardfield is not actually in Uttlesford, but in Braintree District, however it is a very good place to first see the Oxlip, and you can then visit Shadwell Wood and West Wood in Uttlesford where you will see it growing in a woodland setting.

1. START in the centre of the village near the Co-op store in Brook Street. There is plenty of parking space in this street. Begin opposite the Co-op and walk westwards into High Street with its lovely old buildings until you come to the Town Hall on the left hand side, and look up on the front wall to see a carving of the Oxlip plant. Retrace your steps back to Brook Street and continue past the point where you started, noting the stream and the viilage school, which also has the Oxlip as its emblem. When you arrive at the Lych Gate walk into the churchyard, then bear left in front of the church entrance to reach a gate into a field. 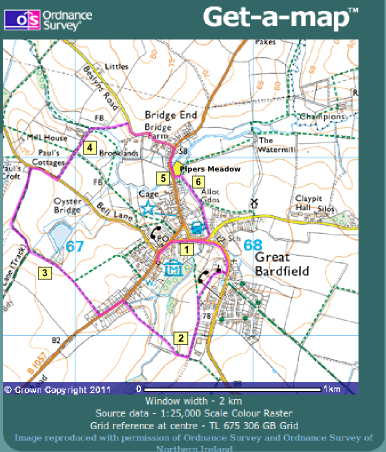 2. Walk in a straight line to meet a tarmacked track. Continue to the end of this where it meets a grassed track. Turn right and follow the path over a stream and into a field. Turn right to walk around the field edge until coming to a gap in the house fences. Walk down the steps and along this muddy path to come out onto Dunmow Road. Turn left and walk along the pavement to its end where you cross the road to take a wide grassed track between houses.

3. Continue along this track passing a copse of trees and a hedge to pass into the next field to walk to the right alongside a bank. At the end of this path turn right into a tarmacked track to walk out onto the road, Bell Lane.

4. Turn right and walk a short distance along the road to a tarmacked track on the left marked “Copford Hall”. Follow this track to its end, then turn right in front of a gate and then left over a bridge to enter a field. Bear right to walk around this field and up the next one to a stile.

5. Cross the stile onto a road , Beslyns Road, turning right and continue along this minor road to the junction with another road, Bridge Street. Cross over and turning right walk on the pavement back into Great Bardfield, crossing the River Pant and looking at this wonderful old bridge. Directly after crossing the bridge the meadow on your left is
Pipers Meadow, where the Bardfield Oxlip has been reintroduced. A display panel by the gate explains the history of the plant and the reintroduction project. If you are visiting in April you will see the Oxlip in flower.

6. Passing the meadow and the first terrace of cottages, turn sharp left down a narrow path to walk between buildings and gardens out into a field. Turn right to walk alongside the stream and view the Gibralter Mill windmill, built 1704, across the field. The mill has its own wikipedia page at http://en.wikipedia.org/wiki/Gibraltar_Mill,_Great_Bardfield.
At a sharp corner take the right hand path to continue alongside the stream to walk out onto the road at Brook
Street. Turn right here to return to the Co-op Store where the walk started

Resources on the web

Essex Biodiversity Project has more information about the oxlip and the Great Bardfield project on this link http://www.essexbiodiversity.org.uk/species-and-habitats/trees-and-plants/oxlip