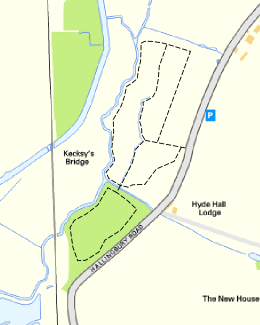 Directions
To the west of the road from Sawbridgeworth to Gaston Green and Little Hallingbury. There is no car park but there are two small lay-bys on the opposite side of the road about 200m north of the reserve entrance. Take Care! – the road is narrow and traffic moves fast.

Description:
This 22 acre marshland nature reserve is owned jointly by Essex and Herts & Middx Wildlife Trusts. It lies in the valley of the River Stort and consists of ten acres of waterlogged marsh, normally under an inch or two of water for most of the year; six acres of peaty meadow sloping up from the marsh to the eastern boundary; and a low-lying willow plantation to the south. The meadows near the road are spring and autumn grazed by Highland cattle.

What to look for:
There are plants which were once quite common but are now found on only a few sites in the county, such as Marsh Willowherb Marsh Valerian, Marsh Arrow-grass, Southern Marsh Orchid and Blunt-flowered Rush. There are several open drainage ditches and two ponds rich in aquatic life. The areas of sedge, reeds and tall fen vegetation provide a valuable nesting habitat for reed and sedge warblers. In summer the reserve is alive with insects, Damselflies and Dragonflies are much in evidence.